John Kessler’s chosen medium, sculpture, serves as a lens to the serenity and truth of the wild. He peers through this lens, observes the full splendor and substance of what lies 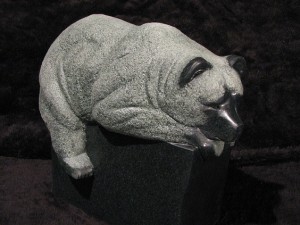 beneath, and then creates it anew.

Kessler’s sculptures give the impression of being somehow alive, capable of communicating the most essential truths. Gargantuan bears rest on their paws or stand sentinel on jutting rocks. Their eyes are more than two holes carved from expanded obsidian. They are deep and mysterious in a way that only nature or John Kessler could make them.

Perhaps it is John’s appreciation of these animals that allows him to render them so beautifully from stone. “This is my way of possessing the animals without compromising them in the wilds,” he says.

John left his successful career as a wine salesman in 1993 to explore the spiritual side of his art. He made his home in the mountains of Taos, New Mexico, and Lake George, Colorado, where he was surrounded by the nature that inspires his work.

John’s signature stone is expanded obsidian, a black volcanic glass hand-chosen from a mine near Yosemite National Park in California. Over the years, he has learned to listen to the rock before he carves it. “I look at the stone and see what it wants to be,” John says. “I used to make the rock be what I wanted it to be, but I learned not to fight, but rather to say, ‘All right, we will do it your way.’”

Through this process, John has found both spiritual and artistic fulfillment. Now living full time in Colorado, he enjoys the quiet hours that he spends in his outdoor studio. There, surrounded by earth and stone and sky, he creates.